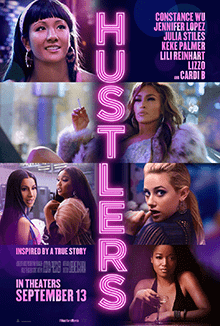 Now this film wasn’t really on my radar. I’d heard bits about it but the general marketing didn’t really sell the film to me. However, once it started playing the festivals I heard great reviews for this so I decided to give it a look and I’m glad I did. This is a well made crime film that offers good insight into the lives of strippers.

Starting in 2007, the film follows Destiny, a woman working as a stripper in order to provide money for her nan. Whilst she initially isn’t that good at it, Destiny becomes friends with Ramona, a popular dancer at the club, who takes Destiny under her wing, teaching her about the types of men that visit the club and how to play on their needs. Whilst they see success at the club, the 2008 financial crash happens which destroys the ability of the two to earn money, with the new customers at the club now demanding sex and whilst Destiny tries to find other employment, her lack of experience outside of clubs hinders her. However, Ramona and Destiny reconnect, with Ramona introducing Destiny to a scheme she’s running with two other strippers, Annabelle and Mercedes, to drug rich men, run up huge bills on their credit cards and rely on their embarrassment over spending money in a strip club to prevent them from going to the police. This scheme works wonders for the two, but things end up going wrong, putting the two in the eyes of the police. Now the first thing to say about the film is how it deals with the main characters being strippers, and this is where I think the film being written and directed by a woman works. In other films, the main characters would have been inherently villanised just because of their position as strippers. Here though, there’s more of a sympathetic edge to the portrayal of strippers, not demonising the women who choose to go into the profession and showing a degree of solidarity and comradeship between the strippers. Furthermore, the film does a great job at showing the comparisons between strip clubs and Wall Street, showing how the actions of the Wall Street bankers in strip clubs may be them at their most honest, because at least in strips clubs they know exactly how they use the people around them, and how the employees can use this to their advantage. There are also interesting ideas raised about the representation of strippers in the media, with the framing story of Destiny talking to a journalist, with Destiny raising concerns about how she will be framed, which goes back to my point regarding how this film does not demonise strippers.

The performances I found were solid. Constance Wu as Destiny is pretty good, showing her to be someone wanting to create the best life for herself and her family, showing how she was able to be convinced to take part in the scheme effectively and showing how her desire to provide for her daughter helps influence the character. Jennifer Lopez meanwhile is excellent here. Now I haven’t actually seen any other films staring Lopez before so I didn’t really have any pre-conceptions about her performance, but she was great here, showing off this raw power to the character that shows why others trusted her and how she was able to run the scheme effectively, with her introduction in the film being one of the most striking of the year. There’s also this sense of pathos and tragedy to her character through her relationship with her daughter and how others in society outside of the world of strippers view her and demean her at every step. The chemistry between Wu and Lopez is excellent, showing the friendship brilliantly and how the mentor relationship works well. For the other cast, Lili Reinhart and Keke Palmer get some good comedic moments as Annabelle and Mercedes, Julia Stiles gets some good moments as the journalist covering the story and Wai Ching Ho gets some great moments as Destiny’s nan.

On a technical level, the film is pretty impressive. Whilst the scenes in the strip club are a bit disorienting, this does feel like an accurate impression of strip clubs, with this enhanced by the costume design, which feels practical for strippers, with it also being designed in a way to avoid showing nudity. The music meanwhile I found was a mixed bag, although that’s more due to my taste in music, it does fit with the tone of the film, it’s just not the kind of music I personally like.

Overall, I found Hustlers to be an engaging crime story and interesting look into the lives of strippers. By not demonising the characters we get a more nuanced look at their lives and see how different levels of exploitation in this world, showing how these women gained back control after others have exploited them. Sure I think there needed to be a bit more of a transition for the characters between the second and third acts and there are some pacing issues, but this was still a very engaging film.