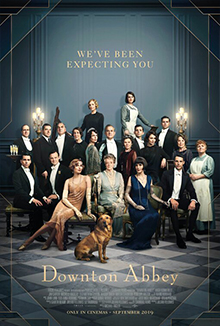 Since it came out Downton Abbey has been a big guilty pleasure for me. Sure it’s silly and the storylines, especially in the later series, were complete nonsense, but I still have fun whenever I watch Downton Abbey. So when the film was announced, I was intrigued, but there was always the question of whether it would actually work as a film, or even whether the film would actually feel like a film. Having seen it, I have to say that this does not feel like a film, rather it plays like one of the Christmas specials. This isn’t a bad thing and I still enjoyed it, but it does mean that it feels a bit rushed.

Taking place in 1927, the film concerns a visit by King George V and Queen Mary to Downton Abbey as part of a tour of Yorkshire. Whilst it is an honour, the visit does cause disruption to life in Downton, especially for the servants who are pushed out of the way to make way for the Royal servants, clashing with the King’s Butler, with this leading to Carson, who retired in the last Christmas special, to be brought back temporarily. In order to have some sense of purpose, the servants conspire to hide away the Royal servants and take over at the Royal dinner. Alongside this plot, there are sub-plots about Barrow forming a friendship with the King’s dresser, Tom Branson’s republican ideals coming back, a love triangle with Daisy, Alfred and Downton’s plumber, an attempted assassination, Edith’s relationship with her husband, Mary worrying about whether it is worth carrying on with Downton and a dispute between Violet Crawley and Maude Bagshaw, the Queen’s lady in waiting, over an inheritance. Now in terms of structure and tone, this fits right in with Downton. More specifically, this feels exactly like one of the Christmas specials in feeling like the culmination of a whole string of plot points. The problem though is that we haven’t seen those plot points and so the whole thing feels rushed. Even the inciting incident which results in Carson being brought back is rushed, with Carson being brought back because Barrow wanted to wait until the King’s butler arrived before choosing the silverware. This should have been the culmination of an arc over the relationship between Mary and Barrow, along with Lord Grantham gaining more respect for Barrow feeling like the end of an arc, but here the whole thing is set up and concluded within 5 minutes. There’s even one moment towards the end which feels like a big emotional moment which comes right out of nowhere and feels like it was only included as a last hurrah for Maggie Smith in case more Downton films are made without her. Furthermore, the sillier elements of the later seasons of Downton are in full force, especially with Branson’s sub-plot which is more fitting of a political thriller than Downton and just felt ridiculous in how this sub-plot was set up. There are even some points which go against what was set up in the final episode, an example being with Daisy where the last Christmas special said she was going to leave Downton and go to her father-in-law’s farm, but here she’s still at Downton and no mention is given to this. Again, this feels like something that should have been at the end of a series, but here is just rushed to fit an entire seasons worth of character arcs and plot into a 2 hour film.

The performances on the whole are exactly what you expect from Downton Abbey. The cast have spent so long playing the characters that it’s almost second nature for them and it’s great to see the cast again. There is some special charm in seeing Jim Carter as Carson returning to Downton, even if the circumstances for his return are rushed and Robert James-Collier gets some good sympathetic moments allowing him to explore Barrow’s homosexuality in a more affectionate way. The cast also get some great comedy moments with the expected word battles between Maggie Smith and Penelope Wilton being as entertaining as ever and it’s great to see Smith and Imelda Staunton face off again, and the film is frequently stolen by Kevin Doyle as Moseley, who gets the biggest laughs in the film, especially one moment where he essentially emulates Theresa May. However, most of the existing cast get very little to do when there could have been really interesting moments for their characters. As an example, after there being so much attention given in Season 6 to Bates and Anna having a kid together, their kid is only on screen for about 10 seconds. Again, this goes back to the issue of the film feeling like an entire season of Downton condensed into 2 hours. Of the new cast, David Haig as the Royal Butler is suitably intimidating, Tuppence Middleton and Max Brown are charming in their roles, Kate Phillips gets some good emotional moments as Princess Mary, as I said it’s great to see Imelda Staunton trade barbs with Maggie Smith, Mark Addy gets a decent cameo and Simon Jones and Geraldine James are entertaining, if underutilised, as the King and Queen.

On a technical level, there isn’t much of an improvement from the TV series, but that’s not necessarily a bad thing. I have to admit I got a lot of joy from hearing the traditional Downton music played through cinema speakers and there didn’t really need to be any changes made to the look of Downton itself, along with the costume design fitting the period perfectly. The cinematography does have some good shot composition, especially for how Downton is framed, but it can’t escape the televisual look, especially since the director of the film has more TV experience, including directing a few episodes of Downton, including the series finale. Again, the style of the film works for Downton, just not necessarily for the cinema.