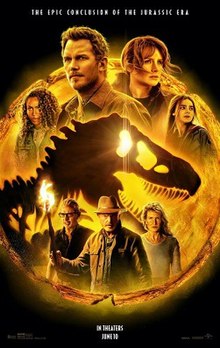 The Jurassic Park series is one that has been a bit of a mixed bag on the whole. The first film is an undisputed classic and is easily one of the best films that Steven Spielberg has made. The other films in the series though have ranged from okay (such as The Lost World and Jurassic World) to just plain bad with Jurassic World: Fallen Kingdom being the low point of the series for me. With Jurassic World: Dominion, we come to what is supposedly the end of the Jurassic Park series and, given that director Colin Trevorrow was originally meant to direct Star Wars: Episode 9, there was the idea that, with this, Trevorrow could have shown how to end a series in a more fulfilling way than The Rise of Skywalker ended up being. However, this ended up playing things way too safe and it ends up being a pretty big disappointment.

Set four years after the events of Fallen Kingdom, which ended with dinosaurs being let loose into the world, the film picks up with Owen Grady and Claire Dearing raising Maisie Lockwood, the clone of Charlotte Lockwood, in hiding to avoid her getting captured and experimented on for being a clone. When Maisie ends up getting kidnapped, along with the offspring of Velociraptor Blue, Owen and Claire have to go to a dinosaur sanctuary run by genetics company BioSyn to rescue her. At the same time, the characters from the original film, Ellie Satler and Alan Grant, are brought to BioSyn by Ian Malcolm to investigate genetically engineered locusts that are destroying crops throughout America, except those planted by BioSyn, which threatens a global ecological collapse. You’ll notice that I didn’t really mention the fallout from dinosaurs being let loose into the world and that’s because, aside from one or two scenes, this isn’t the focus of the film. There were loads of story opportunities that could be explored from dinosaurs and humans being forced to adapt to each other but pretty much none of those ideas were explored here. Instead, it takes the characters and the dinosaurs and puts them in another enclosed environment, making it feel no different than any of the other films in the series. This film could have expanded the scope of the series but it plays things way too safe. As much as I didn’t like Fallen Kingdom, having more of a haunted house aesthetic in the third act did give it a unique feel compared to the other Jurassic Park films. It also doesn’t help that the central idea of the film, that being the genetically engineered locusts as a metaphor for climate change, whilst it is given a lot of screentime, is not explored enough to really make sense and it felt tacked on to give a reason for the characters from the first film to come back, even though their connection to it feels tenuous at best. There are glimpses of the good work that could have been done here with elements such as a dinosaur black market, but the whole film feels like it wallows in nostalgia more than it tries to do something new and it ends up feeling pretty boring to me.

The performances meanwhile don’t help with the boredom I felt. Chris Pratt is normally a pretty charismatic actor in things like the MCU or The Lego Movie, but his charisma is really toned down here and there isn’t really any character development for him, making me pretty bored when he was on screen. The same is also true for Bryce Dallas Howard. As with Fallen Kingdom, it feels like important character development for her happened off screen and there are clearly moments which should have been given more attention, like her relationship with new character Kayla, that feel very rushed. Isabella Sermon as Maisie meanwhile is pretty bad here, her line delivery coming across as really flat and forced and she doesn’t have the right chemistry with the cast to make her character development work. I understand what was being aimed for here, but it didn’t work. DeWanda Wise as Kayla is a charismatic presence, but the changes to her character come out of nowhere and as such I didn’t believe the progression of her character whilst Mamoudou Athie is pretty bland, even though he is a pivotal character to the plot. It was nice to see Omar Sy back, but he’s given so little to do it makes you wonder why he was brought back at all, not helping matters being that the natural charm he has, as shown expertly in Lupin, is dialed way down here. Campbell Scott as Dodgson comes across as a very generic villain, clearly going for a Steve Jobs vibe, but never at any point makes you understand what his actually end goal is, whilst B.D. Wong as Dr Wu feels very confused, wanting to give him a redemption arc, but not putting in the work in the earlier films, or even in this one, to understand what his goals actually are, so you don’t buy the redemption as you don’t know what he’s trying to redeem. Sam Neill, Laura Dern and Jeff Goldblum still have the strong on screen relationship they had in the first film and the film does come alive when they’re on screen, even if there are a few moments where Neill’s New Zealand accent comes through.

The technical elements of the film are pretty mixed. The effects used for the dinosaurs are mostly solid, although there are a few moments where the animatronics used look a bit too robotic and some of the CG looks a bit too fake. I liked that some feathered dinosaurs were included here, bringing in more of the known information about how dinosaurs looked, but this brings in another issues I had in that the dinosaurs felt like an afterthought. More attention was given to the locusts that you lose the sense of majesty with the dinosaurs you got in the earlier films and there wasn’t really any point where the dinosaurs felt scary because they’re given so little attention. Michael Giachinno’s music is fine here, doing the job at building the atmosphere and the direction of the action scenes is well handled. There are flourishes here and there which could have led to a more interesting film visually, like with the fire in the third act and snow in the first act, given this a more unique look, but in the end it felt like a bit of a waste.

Overall, Jurassic World: Dominion is a bit of a damp squib to end the series on. Instead of building from the ending of the last film to fully show the consequences of dinosaurs being loose in the world, this film plays everything safe and retreats back into the tried and tested formula of the other Jurassic Park films. Whilst it isn’t as stupid and badly written as Fallen Kingdom, this is still a pretty bad film and a disappointing end to the series.