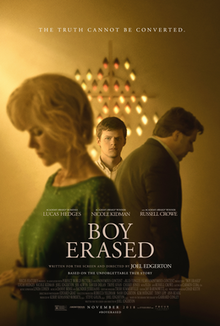 I won’t beat around the bush with my thoughts, conversion therapy is evil. The way that it is used to condition people to hate themselves, along with the physical abuse a lot of people who have been through it have experienced, shows it to be a truly repugnant action. In terms of film, this is the second high profile film to come out about conversion therapy in the past few months, the first being The Miseducation of Cameron Post. Whilst Boy Erased is an important film, in terms of it as a film, I do think it has some issues.

The film tells the story of Garrad Conley (here renamed Jared Eamons, and is how I’ll be referring to him for the rest of the review) who, following a series of incidents at university, comes out to his parents as gay. His dad, being a pastor, reacts badly to this, sending Jared off to a conversion therapy centre, with Jared’s mum going along to support him. However, Jared soon discovers the reality of the conversion therapy centre, including that he may be forced to stay there longer than he originally thought. Now the general message of the film and the exposure of the dangers of conversion therapy is admirable and the film does a good job at showcasing the damage that it does and how people outside of the system can be convinced that it is necessary. There are also some strong elements regarding how messed up the conversion therapy programme is, filled with pseudoscience and spelling errors. However, there are some issues I had with the film in terms of its overall structure. Firstly, the use of flashbacks in the film was a bit mixed, some of them are well executed, mainly the relationship between Jared and Henry, a person he knows at university, which ends up with Jared being outed following a horrific act committed against him (although the way that scene was executed didn’t quite work in the context of the film), but one flashback, with Jared spending a night with art student Xavier, should have been given more time to really explore its important to Jared.

The performances are pretty strong in the film though. Lucas Hedges as Jared is excellent, showing his anger over conversion therapy and a sense of compassion that is being stamped out. When we see his anger and the struggle in coming to terms with his identity, Hedges shows this effectively and crafts a strong focal point for the film. Joel Edgerton as the leader of the conversion therapy church meanwhile is an effectively hateful character, but, especially given the reveal about him at the end of the film, I think more time could have been spent getting to understand why he was so committed to conversion therapy (like the time spent with John Gallagher Jr and Jennifer Ehle in The Miseducation of Cameron Post). As Jared’s parents, Nicole Kidman and Russell Crowe are fine, Kidman showing off a compassionate air that Jared needs, whilst Crowe effectively shows the pressure he feels having a gay son and trying to make him more acceptable in his eyes, but I wish more time was spent on them. There are also decent turns from Flea, Britton Sear, Xavier Dolan, Troye Sivan and Jesse LaTourette, and I wish more of the film explored how their actions impacted Jared.

Overall, Boy Erased is an important film, that doesn’t quite work 100% as a film. I know that part of my hesitation regarding this film is through my personal preference for the decisions made with The Miseducation of Cameron Post, but there are some big structural issues with Boy Erased that prevent it from being a great film.