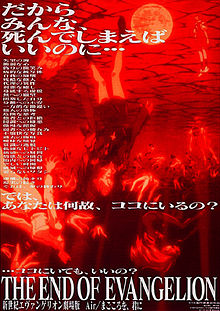 So to finish off my series of anime reviews, I’m going to do a review of probably the biggest mindfuck film I’ve ever seen (that wasn’t directed by David Lynch), the End of Evangelion. Now, when I first watched the film, I did it after my housemate from last year showed me the entire series run, excluding the final two episodes, watching this film instead of the shows ending. I know enough about the ending of the show and have seen enough clips of it to understand the basic gist of the shows ending, but, since I’ve not seen those episodes, I cannot go into full detail about them. As for the overall show, I have to say that Neon Genesis Evangelion is one of the best pieces of animation I’ve seen. Its study of humanity, religion and the psychology of the characters is excellent, the shift from an action oriented to a more metaphysical show feeling incredibly natural, and you can understand how personal a project it was for creator Hideaki Anno. In order for me to review this film properly though, there will need to be some spoilers for the show, so consider this your spoiler warning. With that out of the way, here is my review of The End of Evangelion. Now it will be hard to go into detail into the plot of this film without giving at least a brief overview of the original series. The series takes place 15 years after a catastrophe known as Second Impact, which almost brought about the end of the world, when the forces that caused Second Impact, known as the Angels, returning. Knowing that the Angels would return, the UN created NERV, a paramilitary organisation operating out of Tokyo-3, to build bio-mechanical mechs, known as the Evangelion, to battle the Angels. The show focuses on Shinji Ikari, the son of Gendo Ikari, the head of NERV, who is chosen to pilot one of the Evangelion (or EVA) to fight against the Angels. After initial reluctance, Shinji accepts and, over the course of the series, we see Shinji battle not only the Angels, but his own psychological torment over the actions he is forced to do and the battles in his mind created by the Angels. Within this, we see the other EVA pilots, Rei Ayanami, weird the best way I can describe Rei without fully spoiling the series, and Asuka Langley, a hot-headed German pilot who becomes the object of Shinji’s lust and who suffers from her own psychological issues. Now the show is an incredible work of animation, seamlessly blending incredibly character studies with a good deal of humour, strong thematic weight and excellent action scenes. The film is an alternative version of the final episodes of the show, after Shinji is forced to kill the only person who truly loves him. After this, NERV gets attacked by the Japanese Strategic Self Defence Force, sent by SEELE, the committee overseeing NERV after they realise Gendo Ikari has his own hidden agenda. With the staff of NERV getting killed, Shinji nearly being one of them due to his depression making him unwilling to fight back, Gendo Ikari sets about his final actions relating to the Angels, and how it relates to Rei. Now the plot does feel like a natural continuation of the plot of the show and I can buy arguments saying that this film is the true ending of the show. Personally, I don’t feel that way, for reasons which I’ll get into later, but it does work as a complementary ending. We get good character development for Gendo Ikari after we find out what his ultimate goal was, creating some elements of sympathy towards a truly awful person, there are some powerful elements revolving around Ritsuko Akagi, a chief scientist at NERV, in particular regarding the relationship she has with both her mum and with Gendo and we get the culmination of the relationship between Shinji and his guardian/field commander of the EVA at NERV, which I can’t really go into much detail about here as it would spoil the overall plot of the show. Needless to say, the plot isn’t where the real weight of The End of Evangelion lies, nor is it the excellent animation, which takes full advantage in the increase of the budget compared to that of the show, which was a constant victim of budget cuts, what I want to talk about with The End of Evangelion is its thematic weight.

The element of depression is something that I want to discuss in regard to this film. For those of you who don’t know, during the production of Neon Genesis Evangelion, Hideaki Anno was suffering from depression and his battle against depression formed a focal point of the show through the character of Shinji, who suffers from growing depression and alienation as the events of the show go on and he loses connections to those who care for him, even being forced to kill the one person who truly loves him. Now from what I gather from the ending of the show, the show ended with Shinji coming to understand his own value in the universe, and how this gives him a reason to live, which seems to me to be a metaphor for succeeding in the battle against depression. In the film though, Shinji is given control over the fate of humanity and, filled with his own self loathing, chooses to reject the notion of individual humanity, reducing all of humanity to primordial soup (or Tang). This seems to be a complete rejection of the original ending of the show and seems to show the damage of being consumed by depression, the depression and self loathing faced by Shinji and his rejection of any attempts to help him leads to the whole of humanity suffering due to the failings of Shinji.

However, even with the knowledge that Shinji is suffering from depression, that doesn’t make Shinji likeable: Shinji is a completely pathetic character and the genius of the film is how this reflects back on the viewers for their own failures. After the ending of the show, Hideaki Anno was inundated with death threats, some of which are shown in the film, from fans of the show who rejected the metaphysical nature of the shows ending. Through everything we see of Shinji in this film, the whole film feels like an act of revenge on the part of Hideaki Anno against the audience, giving the audience what they wanted but twisting it all into a format that makes it so you never wanted to see any of it. The action scenes involving the Evas are excellently framed, but so brutal and disgusting, the pain felt by the characters so real that you need to look away. There is plenty of fanservice relating to Asuka and Misato, but the film shows just how pathetic holding these fantasies in your head is. The film opens on a condemnatory note in this regard by showing Shinji masturbating over Asuka’s comatose body and having Asuka, Rei and Misato condemn Shinji for his attitudes towards women. Even at the end when Shinji is given Asuka back to him, the first thing he does is try to strangle her but he’s so impotent that he can’t even do that, with the disgust Asuka feels towards Shinji being one of the many interpretations for the final line of the film.

There are other elements of thematic weight within the film, from the usage of Judeo-Christian symbolism through images of crosses, the Tree of Life (or the Tree of Sephiroth, one of the major images of Kaballah) to elements of the Oepidal complex relating to Shinji and Asuka, this nature enforced by the overall design of the EVAs, along with their power source. Now I don’t feel qualified enough to talk about these themes, I don’t know enough about the nature of the symbolism to provide enough of a context for this symbolism, but what I will say is that the religious symbolism helps to highlight the apocalyptic imagery of the film and the psychological elements of the film help provide a greater understanding of the characters, letting you understand their mindset, helped by some more abstract film techniques in the second half of the film involving flashbacks and the use of live action.

Overall, The End of Evangelion is an incredibly powerful end to Neon Genesis Evangelion. Whether or not it’s a more fitting end to the overall story than the ending of the series is something I cannot say, and the element of revenge on the part of Hideaki Anno, whilst providing a solid thematic base, does provide an element of contradiction between what I’ve heard about the ending of the show and this film. You will need to watch the film multiple times in order to gain an understanding of the symbolism of the film, but if you are willing to unpack the film, it can be a very rewarding experience, if a complete mindfuck.

One thought on “The End of Evangelion Review”