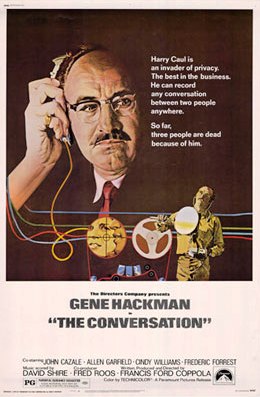 So for the penultimate film in this years Blind Spot reviews, I wanted to go for a thriller and, after looking at lists of the best thrillers, one that kept popping out at me was The Conversation. All the elements of the plot regarding tapped conversations are just as relevant now as they were in the 70s, plus it’s a film from the golden age of Francis Ford Coppola, a director who’s films I’m not as familiar with as I should be, having only seen the first 2 Godfather films, and I thought this would be a good gateway into his other films. I have to say I was right, The Conversation is a very intelligent thriller with an incredible central performance from Gene Hackman.The plot concerns Harry Caul, a surveillance expert hired to provide recordings of a conversation between two people by the head of a major company. After the recording is completed, Caul becomes convinced that the people who hired him will use the recording to kill the people in the recording and becomes paranoid for their safety, amplified by his work leading to the deaths of 3 other people previously, along with being paranoid for his own safety. The sense of tension created throughout the film is incredible. There is never a moment where you feel that the characters are completely safe and the idea that conversations can be monitored from any location firmly puts you into the mindset and paranoia of the characters, mainly that of Caul. Through seeing everything that Caul does, it becomes clear why Caul is so paranoid and why his flat is so bare bones. It also helps when we see the other people in Caul’s profession at a convention and when they go back to Caul’s workshop and we see how relaxed they are about the whole thing, laughing and joking about the invasion of privacy that Caul is so paranoid about. The main element that makes the paranoia work so well is that we see every detail of how Caul intercepts conversations, even in dense crowds, to ensure that every word is picked up, something that can fill you with fear, especially now as the technology for such things has advanced heavily since the 70s. The film also does a good job at showing the fluid nature of conversations and how slight changes in accent on certain words completely change the meaning of conversations, most of the plot centred on Caul’s interpretation of a line in the conversation he monitors but, after we see everything play out, we hear the line again and hear the stress given to a different word which changes the meaning of the line and shows how it fits the real intentions of the people being recorded.

The main reason why the film works though is the performance from Gene Hackman as Caul, probably the best performance in Hackman’s career. He fills Caul with so much paranoia and anxiety, fearing about everything which makes him a very secluded person, even around people he’s familiar with. Hackman shows how hard it is for Caul to connect with people and, whilst it does make him good at his job, it has left him empty as a human being, only finding solace in his saxophone playing. Hackman also shows the guilt that Caul feels brilliantly, especially when mixed with Caul’s Catholicism which further shows why he feels so responsible for killing people and why he doesn’t want it to happen again. There are also great performances from Harrison Ford, John Cazale and Allen Garfield, all working around Hackman to create a very compelling story.

Overall, The Conversation is a very intelligent thriller that is completely ahead of it’s time going into themes of paranoia, the whole nature of language and conversations and guilt, spearheaded by a superbly written script, great direction and an all time great performance by Gene Hackman.