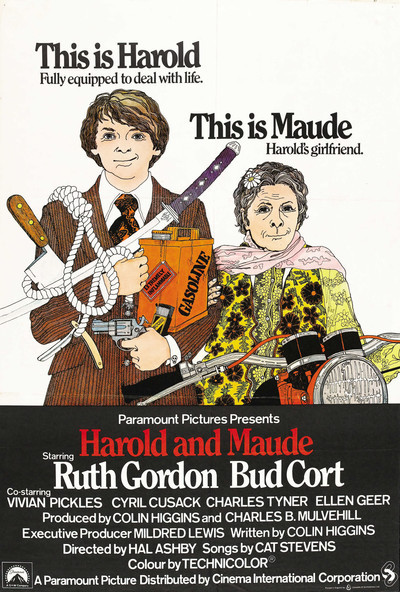 For the next film in my blind spot selections I wanted to go more towards a dark comedy. Considering it’s reputation, I couldn’t think of a better choice than Harold and Maude. Whenever anyone talks about great dark comedies, this is always the one that is brought up and with good reason. This is the quintessential dark comedy and, after watching, it’s easy to see why.The film focuses on Harold Chasen, a young man obsessed with death who drives around in a hearse, attends funerals and stages elaborate suicides. At one of the funerals Harodl attends, he meets 79 year old Maude Chardin, who has a carefree attitude to life and death, with the two sparking up a relationship which later turns romantic. The main thing the film needed to do in order to work properly was make the relationship between Harold and Maude feel believable and in this aspect, the film more than succeeds. The contrast between the personalities of Harold and Maude is excellent, the two being a perfect yin and yang, and it’s clear to see the influence of the relationship between Harold and Maude on other films, such as Only Lovers Left Alive. There’s also a sweetness to the relationship which makes it very endearing to watch, which makes the overall film endearing to watch. The film also does a great job showing Harold’s outlook on life, letting us understand how Harold obtained his obsession with death and his contrast with wider society, notably his mother (who arranges a series of dates and replaces his hearse with a Jaguar) and his uncle (who wants him to go to Vietnam, until a stunt by Harold and Maude convinces him otherwise). The comedy of the film is top notch as well. There were many points of the film which made me belly laugh, mainly all of Harold’s suicides and the reactions of everyone around him, from his mother’s resigned acceptance to the horrified reactions of the dates, but this also becomes tragic when we find out why Harold fakes the suicides. The mixing of the comedic and the tragic works wonders for the film, making it an incredibly rich experience.

The acting in the film is strong as well. Bud Cort does a great performance as Harold. There’s a melancholic presence he brings to the character which lets you understand his fascination with death and his delivery and body language nails the comedic aspects of the film. Ruth Gordon meanwhile is equally excellent as Maude. There’s a clear, fairly tragic past to the character hinted at throughout the film, which lets you understand her love of life, her desire to make full use of every day, living each day like it’s her last. There’s this joy that Gordon brings to the role that makes her such a likeable character and the contrast between her and Cort, along with the similarities they have and the strong chemistry Cort and Gordon have makes the relationship between the two incredibly believable and touching. The other performances have some great comedic moments, notably the bored, resigned acceptance and controlling nature of Vivian Pickles as Harold’s mum and the rampant xenophobia and overt nationalism of Charles Tyner and Harold’s uncle.

On a technical level, the film is very impressive. The use of the cars and the strong location work adds a lot of atmosphere to the film. The costume design does a lot of great work to inform the characters. The best element of the technical aspects come with the music though. The use of Cat Stevens’ music and the juxtaposition it provides with the tone of the film adds to the great, darkly comedic tone of the film, along with doing a great job informing the characters, mainly Maude.

Overall, Harold and Maude is easily one of the best dark comedies to be released. The themes regarding the nature of life and death create some great, thematic depth to the film, along with providing laugh out loud hilarious moments. The main element that makes the film work though is the relationship between Harold and Maude, aided by an excellent script and strong performances from Bud Cort and Ruth Gordon.

One thought on “2016 Blind Spot: Harold and Maude”