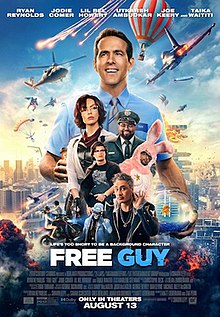 This film ended up being a really pleasant surprise. Watching the trailers I expected this to be a fairly generic comedy that took the tropes of video games to make something pretty generic. However, watching the film, I was struck by it being a pretty sincere and charming look at artificial intelligence.

The film is set in the world of Free City, a Grand Theft Auto style game, and focuses on Guy, a NPC who has the role of a bank teller who is becoming self aware. One day, after encountering a player known to him as Molotov Girl, he becomes fully self aware and starts to see the reality of the game world, as it appears to players. In response to this, and to get Molotov Girl’s attention, he starts acting as a hero, stopping the players of Free City from committing crimes, earning an online following as a result. It also turns out that Molotov Girl is Millie, a programmer who is suing the company that published Free City for stealing her code and Guy’s self awareness becomes part of a wider plan to show the true nature of the game publisher. Now what I like about the film is that it goes more into detail than you’d think about the nature of artificial intelligence with Guy. As Guy becomes more aware and in control of his surroundings, he begins to question the nature of free will and the film raises more interesting questions about this than I expected from seeing the trailers. This also leads into the most surprising aspect of the film and that’s its sincerity. From the trailers I expected this to be a pretty cynical film and, whilst there is some cynicism in parts, on the whole this is an optimistic and charming film that is more focused on kindness and love being tools for good than on violent actions. There’s a strong heart to the film that makes it a fun watch. I also found the digs the film takes at the game industry, mainly the focus on pumping out product regardless of quality to boost profit margins, decently handled, and there is a fun ‘They Live’ style angle to Guy becoming self aware and seeing the in-game elements that players would see all the time.

The performances as well add to the charm. Ryan Reynolds uses his natural charm to great effect here, showing the naivety of Guy at the start of the film and his growing confidence and sense of personal identity as the film goes on, with there being subtle changes in the way Reynolds delivers his dialogue to reflect this. Jodie Comer as Millie is a lot of fun, handling herself well in the action scenes and creating a clear contrast between the more badass nature of Molotov Girl and the awkward, dorky nature she has as Millie, her body language selling that Molotov Girl is an extension of Millie, but one she’s not exactly comfortable with showing in the real world. Taika Waititi is a pitch perfect example of an obnoxious game developer, having the over the top air of someone in love with themselves, showing his narcissism effectively and making him a villain you love to hate. Joe Keery and Utkarsh Ambudkar have some fun moments and there’s a nice amount of depth Lil Rel Howery brings to his role, helping to act as a central thesis for the film. There are also some fun cameos from people like Channing Tatum, although I don’t want to spoil them all, and the use of famous streamers has a little bit of a pandering air, but helps to make Free City more believable as a game.

The technical elements of the film I found to be really solid. The design of Free City and the constant hustle and bustle in the background makes it believable as a game world and the way the film uses CG makes it look believable as a game. Granted the CG for when we see Free City in the real world doesn’t reflect modern game capabilities, but it does still look believably artificial, if you get my meaning. The costume design as well sells the nature of the game, the NPC costumes looking authentic in their artificiality and I liked that the film didn’t overly sexualise Jodie Comer when she plays Molotov Girl, her costume having this practical, badass nature, when a lesser film would have used the nature of the game to have the costume be for titillation only. I also found there to be an interesting use of the Uncanny Valley at the end of the film, but I don’t want to spoil it. What I will say is that it’s a good example of how the Uncanny Valley can be used for narrative purposes.

Overall, Free Guy is a much more heartfelt and sincere film than I was expecting from the trailers, aided by a pretty intelligent script which has it’s heart in the right place. This ended up being a really pleasant surprise for me and I recommend checking it out.