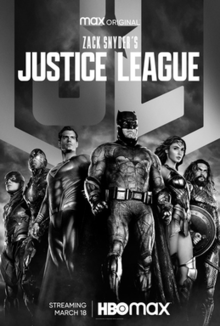 Considering that I did a previous blog entry on the Snyder Cut of Justice League when it was announced that it would actually get released I felt it only fair that I do a review of the actual film. This isn’t going to be like one of the normal reviews I do on this blog, because the situation of this film is different. It will be a bit more freeform that normal. That said, if you just want my overall thoughts on the film, I’d say that this is a better film than the theatrical version, but I still wouldn’t call it a good film.

Before I get into my criticisms, I think it is worth stating where I think this version was better. For starters, Ray Fisher’s performance as Cyborg is absolutely the heart of the film here. It’s clear that he was the cast member the most screwed over by the changes Joss Whedon made, and hearing the stories about Whedon’s behaviour on set it felt like Whedon was being vindictive in how Fisher’s performance was presented. When I did my review of the theatrical cut, I did note Fisher’s performance as one of the things that dragged that film down, but it’s clear that it was Whedon’s fault that the performance didn’t work. Speaking of Whedon, the removal of all of the scenes he shot for the film makes this flow more naturally tonally. There’s no awkward and jarring moments where the tone completely changes and that does make it a more consistent film on the whole. This also means that the performances from Ben Affleck and Ezra Miller feel more natural by removing the more jokey elements that didn’t work.

Moving to the filmmaking, this version looks a lot better than the theatrical version. The editing feels less choppy (although there are editing issues in a different way) as it doesn’t jump awkwardly within scenes between Snyder footage and Whedon footage and the colour grading is a lot more pleasing to the eye. In particular, the ugly red filter over the final action scene is removed and reverted back to the blue aesthetic that Snyder wanted, which has a better visual feel than the theatrical version. The action scenes are much more appealing than in the theatrical version. Say what you will about Snyder, he is a strong director of action and he puts his skills to great use here. This is especially true with the scenes showing the speed force. Snyder’s use of slow motion, whilst feeling gratuitous at other points, is a perfect fit for The Flash and Snyder puts his skill to great effect in these scenes, creating some of the most visually impressive scenes Snyder has done yet.

However, as I said, despite the improvements that have been made, I still don’t think this is not a good film. A lot of the issues I had with Snyder’s previous DCEU films are still here, and if anything are exacerbated by how long it is. I think it is too dour and self serious for it’s own good and when Snyder does try to make the film lighter it doesn’t quite work. There’s also the issues that the plot itself is largely the same as it was in the theatrical version. Sure there’s more depth but there isn’t enough different plot wise to make it stand out from the theatrical version. I still found Steppenwolf to be a weak villain with an unappealing design, even with the extra backstory to him, and the more interesting elements with Darkseid are clear instances of sequel baiting, even though Ray Porter gives an appropriately intimidating performance.

The changes made to the DCEU following the failure of the theatrical cut mean that there are elements that don’t mesh with what comes later. The big element with this for me is the depiction of Atlantis and the underwater world. Snyder’s version is incredibly washed out and he cops out by having air bubbles whenever characters want to speak, which doesn’t align at all with the vibrancy that James Wan brought to Atlantis in Aquaman, both in production and costume design.

Some of the performances meanwhile I didn’t think were that good. Snyder’s vision of Superman means that Henry Cavill isn’t able to use his natural charisma to good effect (plus the hype given to the black suit doesn’t really mean anything), and I found Gal Gadot to be pretty bad here as Wonder Woman. The strength that Gadot has is her skill at presenting compassion and it’s something that Snyder is not able to bring out in her as well as Patty Jenkins is, especially during the exposition scenes. I found Jason Momoa and Jesse Eisenberg to be annoying, Amy Adams, Willem Dafoe and JK Simmons aren’t given enough to do to utilise their talents and whilst Jared Leto is a better Joker here than he was in Suicide Squad, he is still a pretty terrible version of The Joker and, not seeing the history between this version of the characters, meant the scene between Batman and the Joker fell flat.

I also found that some of the worldbuilding that Snyder wanted to do ended up detracting from the emotional stakes of the film. The use of the Knightmare scenes grinds the film to a halt every time they show up, the attention given to Darkseid means Steppenwolf is not really an intimidating presence. This problem is most clear though in that there is an important scene between Lois Lane and Martha Kent which would have been great for both characters, that has it’s emotional value immediately destroyed by the reveal that Lois was actually talking to Martian Manhunter in disguise. This is emblematic of the main problem I had with this film, I just didn’t care about the characters. At no point did I feel any joy, tension, anticipation or any real emotional connection. There are semblances of emotional arcs, but none of them landed and I just felt empty watching the film and that, to me, is one of the worst things a film can make you feel.

One of the main things to talk about with this film is the 4 hour runtime. Now I’m not against films of this length. The only version of Return of the King I like to watch is the extended edition and I thought seeing The Irishman in the cinema was one of the best theatrical experiences I had in 2019. The problem here though isn’t length, but pacing. I found the film to move way too slow. Every scene in the film goes on for a little bit too long and there were a few points, especially in the epilogue, where I felt scenes could have been cut out entirely and nothing of value would have been lost. I think there is a well paced film in here, in a 2 1/2 – 3 hour long cut, around the length of Infinity War or Endgame.

Overall, yes this is a better film than the theatrical version, but that just makes it a consistently bad film rather than a disjointedly bad film. I’m glad that Snyder was able to finish his version of the film and it’s clear just how much it was butchered when Whedon took over, but I still can’t say that I enjoyed this version. I just had no emotional connection with anything that happened on screen and that comes down to a central fault in Snyder’s filmmaking style. When everything is presented as epic, nothing is.