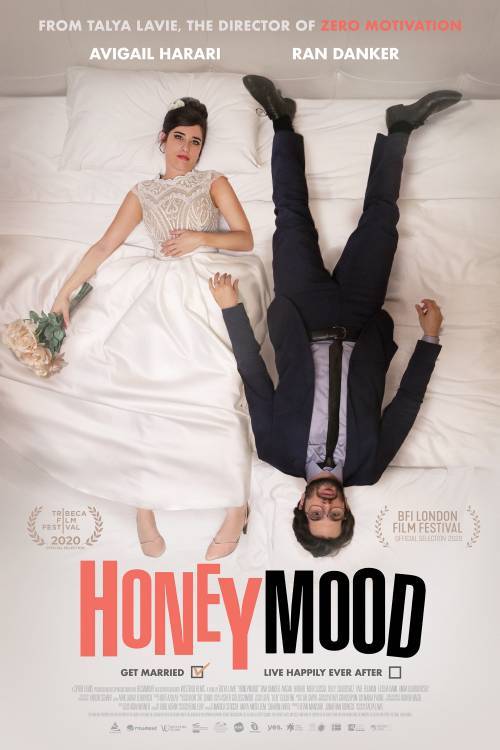 Like many other film festivals, the 2020 London Film Festival has gone mostly virtual this year. There are still films that are being shown in the cinema, but the majority of films are being made available through BFI Player as well. Because of this, I’m going to be able to watch a lot more films at the festival than I normally would and I think I’ve got a good mix of films to watch, the first of which is Honeymood.

Taking place in Jerusalem, the film focuses on Noam and Eleanor, a newly married couple who have just checked into their hotel suite. After Eleanor finds a gift from Noam’s ex girlfriend in his pocket, it leads to the two of them walking around Jerusalem to find out the story behind the gift and prevent their marriage from being cursed, turning into a wild ride throughout the city. Now the first thing I will say about the film is that it is a good comedy, which makes it pretty difficult to review. Saying too much would spoil the jokes and the humour of the film is equal parts dry and over-the-top so spoiling the jokes would pretty much ruin the experience of the film. What I will say is that writer/director Talya Lavie gets the timing for most of the jokes down perfectly and I had a good bit of fun watching the film. There are also interesting ideas at play in the film about the nature of love, how to truly understand if you are in love with someone and the difficulties and personality clashes that take place in any relationship and how these can either strengthen or destroy a relationship. I do think though that the film runs out of steam a bit in the third act. Here, the film goes a bit more into straight up drama and the pacing isn’t quite as strong. I also think the character bits in the third act aren’t as strong as the ones in the first two acts. There are still some strong moments and I think the ending of the film is a perfect fit for the tone that Lavie is going towards, but it does kind of stumble a bit near the end.

What makes the film work throughout are the performances from Avigail Harari and Ran Danker. The way the characters are written could make them come across as annoying if the performers weren’t skilled enough but Harari and Danker work well in making the character flaws feel believable and the chemistry and comedic timing that the two of them have is excellent. In many ways, the chemistry between the two wouldn’t feel out of place in a classic screwball comedy and when the two of them are not together, that’s where the film starts to stumble. Individually, the performances are great and they both bring pathos to their roles in the third act, but it doesn’t have the same power as when they’re together.

The technical elements are also pretty well done in the film. Whilst we never truly get a sense of the geography of Jerusalem in the film, in terms of how each location fully connects to each other and how long it actually takes to get around, it works for the offbeat tone of the film. The direction and cinematography meanwhile have this playful air that makes it so when more abstract parts of the film come in, such as a dance number involving a group of bodyguards, it doesn’t feel out of place. The costume design meanwhile works in creating the offbeat tone of the film, Eleanor’s wedding dress in particular and the damage it takes throughout the film (at one point being held together with duct tape) being the right fit for this film.

Overall, Honeymood I found to be an entertaining film, but one that stumbled a bit in the third act. I can see what Lavie was going for in the third act and, isolated, it does have moments that work, but compared to the great comic beats in the first two acts, aided by the strong performances, the film does stumble. Again, I did enjoy the film and it is worth a watch, it just didn’t quite work as a whole.