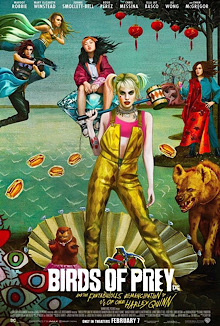 I’ve said before on this site that I’ve not been the biggest fan of the DCEU. On paper it had a lot of the right ideas, but the execution of the films left much to be desired. Of the films released in the DCEU prior to this, only two of them I’d class as good films, those being Wonder Woman and Shazam. This one though I was a bit unsure about. I liked the idea of doing a Birds of Prey film, but the focus on Harley Quinn made me worried. This is not because of Margot Robbie’s performance, she was one of the highlights of Suicide Squad, but with how Suicide Squad characterised Harley Quinn and her relationship with The Joker and there was a part of me that was worried this would make the same mistakes Suicide Squad did. The release of the trailers did quell my worries a bit, but the track record of the DCEU was against this film. However, this joins Wonder Woman and Shazam as one of the good DCEU films, and I ended up having a lot of fun with this.

Taking place some time after the events of Suicide Squad, the film focuses on Harley Quinn, who has recently broken up with The Joker and establishing herself as her own persona, blowing up Ace Chemicals in the process. This though brings the wrath of crime lord Roman Sionis down on her, as he previously would not have attacked her as he didn’t want to get on the wrong side of The Joker. At the same time we see the conflict of a singer at Sionis’ club, Dinah Lance, known as Black Canary, the efforts of Detective Renee Montoya to bring down Sionis and vigilante Huntress, who is looking for revenge for the death of her family. All these players come together when pickpocket Cassandra Cain steals a diamond meant for Sionis and they all have to join together to protect Cain. Now the first thing the film does right is that it gets Harley Quinn. One of the big issues I had with Suicide Squad is the depiction of the relationship between Harley Quinn and The Joker in that it seemed to romanticise an abusive relationship and it fell into the trap a lot of media with Harley Quinn falls into with defining her by her relationship with The Joker and not as her own character. Here though, we get a film that allows Harley to be defined on her own terms and tackles the idea of Harley leaving an abusive relationship and gives Harley her own character. It is a great idea to go for this film, although it does make the film feel more like a Harley Quinn film more than a Birds of Prey film. There are also interesting ideas raised about discrimination within the police with the depiction of Renee Montoya, showing someone who should be high up in the police, but who has been held back by men taking credit for her work and there’s interesting work done about the nature of revenge and abandonment with Huntress and Black Canary, but saying more would spoil the film.

The performances meanwhile are great all around. Margot Robbie was one of the best parts of Suicide Squad but was let down by the script. Here, Robbie is given an interesting character to play, playing into Harley becoming her own person and rejecting the perception of her being defined solely by The Joker and does a great job showing the development of Harley throughout the film. As Montoya, Rosie Perez is also excellent, having this grizzled air to her that shows a weariness with how she’s been treated and this cynicism, and how it changes through her interactions with the others, is brilliantly done. Mary Elizabeth Winstead as Huntress meanwhile steals the film when she’s on screen, having this comically serious air to her that makes her a lot of fun to watch, whilst also doing good work showing the anger she feels and the nature of revenge. Jurnee Smollett-Bell as Black Canary is great at showing her own evolution throughout the film, showing a fight or flight instinct to her at the start of the film and a growing moral compass through her interactions with the others, especially Montoya. Ella Jay Basco as Cassandra Cain meanwhile is a lot of fun, working well with Robbie to create a pseudo mother-daughter relationship between Cain and Quinn. When Robbie, Perez, Winstead and Smollett-Bell interact with other, the sense of camaraderie between them is excellent, the sense of support and affection they all have for each other making the action scenes a lot of fun. As the villains, Ewan McGregor is another scene stealer as Sionis, showing someone with a cruel, sadistic air who presents himself as sophisticated, making him kind of an embodiment of fragile masculinity and McGregor is relishing playing a character as vile as Sionis. Chris Messina as Victor Zsasz meanwhile also relishes playing such a sadistic character and there’s a sense of homoeroticism to the scenes between McGregor and Messina which creates an interesting dynamic between the characters.

On a technical level, the film is impressive. Cathy Yan’s direction and Matthew Libatique’s cinematography do a great job at capturing a more vibrant tone for the film, seeming to be what Suicide Squad was intending to go for with a wilder, more colourful style. This is aided by the editing which works in putting you in the mindset of Harley Quinn and seeing the world the way she sees it. The costume design meanwhile is great, capturing the feel of the cast well and making them feel comfortable for the cast, of particular praise are Harley’s costumes, which work in showing the vibrancy and off kilter nature of the character, and Huntress’ costumes, which have a more utilitarian feel which works for the more straight laced nature of her character. This also works with the costumes for Sionis which have this elegance to them which works well in hiding his sadistic nature and fit the image Sionis wants to create, whilst the design of the Black Mask part of the character has this chilling nature to it, showing the terrifying nature of Sionis. The action scenes as well are well executed, there being a lot of smaller details in them that help flesh out the characters that come from having a female director, the stunt work is excellent and the mix of fighting styles, Harley being more wild and unpredictable, Black Canary having more of a martial arts feel, Montoya being a brawler and Huntress using her crossbow, works in making each character stand out and the teamwork of the characters in the action scenes again helps sell the relationship between the characters.

Overall, Birds of Prey is a good bit of fun and one of the best films in the DCEU. Whilst it is more of a Harley Quinn film than a Birds of Prey film, the film does a good job in building the characters and creating a sense of camaraderie between the women, with there being good social commentary in the film (personally I think this does the social commentary elements better than Joker) and well executed action scenes that help create a more defined world for the DCEU.