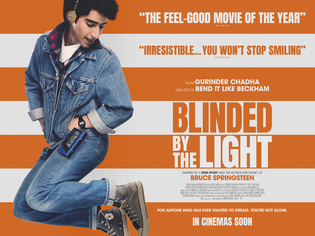 Now this is a film that I’ve been saving my review of for a while. I saw this film over a month ago but I wanted to wait until it’s wide release (and seeing it again) before I made my review, to help me really gather my thoughts on the film. Now, I’m not the biggest fan of Bruce Springsteen, I like his songs but they aren’t my favourites, so I was interested to gain a better understanding of the power Springsteen has for people who are fans of his. This, plus this being from Gurinder Chadha, the director of Bend It Like Beckham, made me interested. I thought I would have a good bit of fun with this. I didn’t expect loving it as much as I did.

The film follows Javed Khan, a teenager of Pakistani descent growing up in Luton in 1987. He wants to leave Luton and make a life for himself through writing, but finds himself unable to due to the pressure put on him by his traditionalist dad Malik. He does some form of rebellion against his dad, such as taking English for A-Levels instead of economics (which his dad wants), but Javed finds himself trapped in Luton. Things aren’t helped when his dad is laid off from the Vauxhall plant in Luton, putting more pressure on Javed and the rest of his family to earn money. However, Javed is introduced to the music of Bruce Springsteen which deeply inspires him to commit more to writing, express himself more by putting his writing out in the public and helps him in a relationship with activist and fellow student Eliza. However, the fear Javed has of standing up to his dad still holds him back, with this forming the core of the film. Now I really liked how the film doesn’t sugar coat the issues of the time. Sure, the film is a light-hearted look at how people are inspired by music, but, by focusing on a Pakistani family in 1987, the film brings up the racism that the family faces through the National Front and the desecration of the local mosque on a wider level, along with more localised issues, including kids urinating through letterboxes. By showing the discrimination faced by the Pakistani community in Luton we get an understanding of the issues Javed is facing and it encourages the desire for Javed to get out of Luton. The film also shows the reality of Thatcherism at the time, with high levels of unemployment and Malik not being able to get another job after he is laid off from Vauxhall, having to sell his wife’s jewellery and have the whole family work to make ends meet, along with paying for his eldest daughter’s wedding and it shows the pressure that is felt by those struggling with money to get by. These two elements of the film give it a great deal of weight that help make it a more satisfying experience on a whole.

Whilst there are darker elements of the film, it is still a fun crowdpleaser, with the music of Springsteen used brilliantly. The right Springsteen songs are used in the film, allowing us to understand why they have inspired Javed, with the film doing a good job at visualising the power the songs have and how Javed connects with them. We see how they inspire Javed to be more confident in his writing and the lyrics of the songs are used to great effect to inform decisions Javed makes in the film. There are also some fun uses of the songs in the film for catharsis, with Javed and his friend Roops (who introduced Javed to Springsteen) using one of the songs to push back against people racially discriminating them and there are scenes which are a great representation of the joy that can be generated by Springsteen’s music set to Thunder Road and Born to Run and when these scenes occurred, especially with Born to Run, I just had a massive grin on my face from how much fun these scenes were.

The performances meanwhile add to the charm of the film. Viveik Kalra as Javed is excellent, brilliantly showing how inspired he is by the work of Springsteen along with showing his passion for writing, whilst also showing the pressure that he feels and how helpless he feels to be able to change his position. As Malik, Kulvinder Ghil takes what could have been a very one-dimensional character and, through his performance and the script, creates a more nuanced character, showing someone who is more of a traditionalist and doesn’t feel connected to British culture, but you understand why as he’s lived through the spectre of Enoch Powell and when he breaks down over how badly things have gone since he lost his job at Vauxhall it’s a powerful scene. As Eliza, Nell Williams makes for a strong love interest, having great chemistry with Kalra and showing off her activist nature well, whilst Aaron Phagura as Roops is a lot of fun and Dean-Charles Chapman as Javed’s friend Matt is great, with a good deal of pathos late on in the film. In other supporting roles, Hayley Atwell makes for a good supportive figure as Javed’s teacher Miss Clay, Rob Brydon gets some good laughs as Matt’s dad, David Hayman makes a powerful impression as Javed’s neighbour Mr Evans,  Nikihta Mehta as Javed’s sister Shazia gets a great scene in the film showing how she comes to terms with her cultural identity and Sally Phillips, Olivia Poulet and Marcus Brigstocke get good laughs in their brief appearances.

Overall, I loved Blinded by the Light. This is a film that fully convinced me of the power of the music of Bruce Springsteen and works as a fun crowdpleaser, without sugar coating the issues faced by the Pakistani community at the time, with the strong performances and excellent script driving the film.