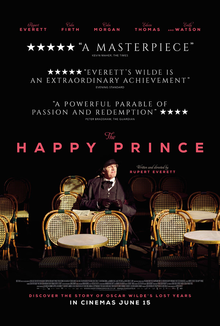 Oscar Wilde is one of those figures whose influence can be seen everywhere but whose work I am not familiar with. I can understand how works like The Picture of Dorian Gray and The Importance of Being Earnest have influenced writers through the years, but really my only knowledge of Wilde is through cultural osmosis, being familiar with his life through the general knowledge of his career. That’s what made The Happy Prince so interesting, to gain an insight into Wilde’s life, along with how gay men were treated in Victorian England, Wilde famously getting sentenced to 2 years hard labour for being gay. It’s a fascinating period to look at, and clearly a labour of love from director/writer/star Rupert Everett, but the film just doesn’t work as well as it should.The film focuses on the final years in the life of Oscar Wilde following his release in prison and his exile in France, with him having to come to terms with the horrific experience he had after his conviction, systemic writers block caused by the trauma, being separated from his family and his complicated feelings towards his former lover Lord Alfred ‘Bosie’ Douglas. Now what works about the film is the sense of anger and pity it has towards Oscar Wilde, showing the horrific treatment of Wilde and how he did not deserve what happened to him, going forward to a sense of anger towards how all people who were gay were treated before being gay was decriminalised. There’s a tragedy in the film in seeing one of the great witty minds of the time be destroyed so that he ends his days as, essentially, a beggar. It’s also fascinating to see the complicated feelings Wilde has for Bosie come to the forefront, clearly being angry with him for the circumstances of his arrest, but still loving him, having a connection to Bosie that he doesn’t really have with anyone else, for good and ill. These are all fascinating elements and could have made an excellent film if these were the main elements of focus. However, there are too many sidetracks, mainly showing Wilde’s relationship with his wife and children. A whole film could have been made about this element, but here there isn’t enough time for the relationship to be defined and the loss to be explored, so we just cut back to England for these scenes, it coming across like Everett was obligated to include Wilde’s wife rather than devote any meaningful time to give her the attention she deserved. There’s also an element regarding Wilde’s relationship with some characters in France who essentially become surrogate sons to him, a lot of the film framed around Wilde telling the story of The Happy Prince to them. but the idea of them being surrogate sons should have been explored more, as is it feels out of place and tacked on to give the film an excuse to tie Wilde’s life to the story of The Happy Prince.

The performances are pretty solid all around. Rupert Everett is excellent as Wilde, showing the wit of the character effectively, but also the sense of anger and tragedy of the character, showing just how broken Wilde is, playing him as someone living in death, stripped of all elements that made him who he is. Colin Firth as Reggie Turner, one of Wilde’s friends, is good, but isn’t given enough to do, establishing his friendship with Wilde but not really doing anything more. Colin Morgan as Bosie is great, giving off an arrogant air and a sense of confidence that lets you understand how Wilde fell in love with him, but also an element of toxicity that lets you know that Wilde should not have contact with him. Morgan’s performance works well in contrast with Edwin Thomas as Robbie Ross, with Ross showing the clear feelings he has for Wilde and his disappointment that Wilde doesn’t reciprocate them, and resentment towards Bosie both for how Bosie helped destroy Wilde and how Wilde was so willing to go back to Bosie. Emily Watson as Constance Lloyd (Wilde’s wife) is solid in her scenes, but she’s in the film so little and the character given so little development and chance to explore her relationship with Wilde that it feels like the character could have been cut from the film entirely and nothing would have been lost.

Overall, The Happy Prince is a bit of a frustrating film. It’s clear that this is a labour of love for Rupert Everett and his performance reflects that, but there are elements that should have been explored in more detail that end up dragging the film down when they come up. When the film focuses on Wilde’s exile and his relationship with Bosie, it shines, but the missed opportunities in the film just stop it from being a true look at Wilde’s latter years.