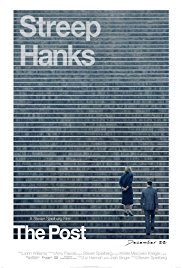 We’re living in a difficult time for the press. In between the likes of Breitbart spreading white supremacist propaganda and Trump deriding stories that treat him as the incompetent racist he is as fake news, the free press is needed now more than ever. As such, this is the perfect time for a film to come along and show the importance of strong journalism, the Pentagon Papers being the perfect subject for this, it being a film involving Steven Spielberg, Tom Hanks and Meryl Streep being the icing on the cake.

The film takes place at the height of the Nixon Administration, prior to the break in at the Watergate hotel, with the release of classified information related to the Vietnam War, originally by the New York Times. The film focuses on the efforts of journalists for The Washington Post, led by editor Ben Bradlee, to find the documents and publish them, with concern being raised by Kay Graham, the owner of the Washington Post, due to it coinciding with the Washington Post being made public, and the idea that, if they face legal action from the Nixon administration then the Post would go bankrupt. Now the most important theme of the film for this time is the need for journalists to report the facts, even in the face of action taken against them by the government. The film makes the argument that a free press, willing to criticise the government, is the most important element of ensuring a stable democracy, and how it is especially important when it is for matters of national security. Most of the second half of the film is dedicated to the debate over whether or not the Washington Post should actually publish the Pentagon Papers and the dialogue for these scenes is brilliantly written, allowing you to understand both sides of whether or not the Papers should be published, even if you don’t agree with one of the sides. There are also interesting elements regarding the relationship between the press and political figures. Good chunks of the film are dedicated to showing how Kay Graham is good friends with Robert McNamara and Ben Bradlee was good friends with JFK, and the idea that the press may not be objective and could pull their punches due to the close relationship they have with those figures, with interesting ethical dilemmas being raised in this regard. The final theme I want to talk about is the feminist element of the film around Kay Graham. For most of the film, Graham is looked down on because of her status as a woman and there is some discussion about how much Graham is used to that treatment and how ingrained the sexism of the time was for all people, including Graham and how it was only when Graham became the publisher of the Washington Post that she was able to realise ambitions she didn’t even realise she had, and that idea is fascinating and executed brilliantly.

The acting meanwhile helps to make the film work. Meryl Streep as Kay Graham gives a bit of an awkward performance at the start of the film, but it works for the character, as someone who has been held back for so long that they struggle to have a voice, and as the film goes on, and Graham has more responsibility, she gets her voice and her confidence with this arc being delivered through the way Streep delivers her dialogue throughout the film. Tom Hanks as Ben Bradlee meanwhile has the right level of righteous anger for the film and a strong commitment to solid journalism, along with the aforementioned ethical question he’s plagued with due to his friendship with JFK, the events of the film making him question whether or not he has pulled punches in the past and yeah, whenever Streep and Hanks are on screen together their work together is just electric, this is the first time Hanks and Streep have been on screen together and it was worth the wait. The rest of the cast give solid performances as well, Matthew Rhys essential playing Daniel Ellsberg with similar mannerisms he gives to Phillip in The Americans, Bob Odenkirk giving a more subdued performance as Ben Bagdikian, Bradley Whitford being the right kind of slimy as Arthur Parsons and Bruce Greenwood creating a fairly complex character with Robert McNamara. I also do think that some actors were wasted, although they gave good performances, I would have liked to have seen more from Alison Brie, Carrie Coon, David Cross, Jesse Plemons, Zach Woods, Tracy Letts and Michael Stuhlbarg, but their performances work in giving a character to the world of the film.

On a technical level, The Post has the high standard you’d expect from a Steven Spielberg film. The production design does a great job at recreating the environment of the Washington Post offices and printing room and creates a good contrast between the environment of the paper and the home environments of Ben Bradlee and Kay Graham. John Williams’ score is the right kind of understated for the film and the cinematography is solid, in particular the scenes showing the printing presses working, there being a degree of respect given to journalism through the way the presses are framed, along with a sense of nostalgia and admiration for the technology itself.

Overall, whilst The Post does have issues in terms of cast members not being utilised to the best of their abilities, that element is more than made up for through the thematic weight of the film, with the importance of this story being especially prominent now in the age of Trump/Brexit, along with it being a great showcase for the talents of Meryl Streep and Tom Hanks, with it being great to see the two work together. This may be on the lower end of Spielberg’s filmography, but that still makes it a great film.