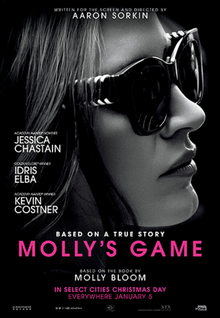 I’ve made it no secret in the past that I’m a massive fan of the work of Aaron Sorkin. For all the faults he has as a writer, and there are a lot of faults with his work, there are very few people with as strong a mastery of dialogue as him. That’s why I was a bit apprehensive about Molly’s Game when it was first announced. Sure the poker world is the perfect playing ground for Sorkin’s signature style of dialogue but with Sorkin in the director’s chair, there was the worry that he wouldn’t be able to direct his dialogue to the same quality that he writes it. Thankfully, Molly’s Game shows that Sorkin is skilled in executing his dialogue along with writing it.

The plot concerns Molly Bloom, a former skiing prodigy who. after losing out on the Olympics, moves to Los Angeles for work before going to law school. During her work as a waitress and secretary, Molly is hired to help run a series of poker games by her boss, which ultimately ends with Molly being fired for making too much money at the games. In response Molly sets up her own games first in Los Angeles then in New York which attract actors, businessmen, Wall Street investors and the Russian Mafia, the last of which results in legal trouble for Molly around which the film is framed. Now one of the main criticisms of Sorkin has been how he writes women, with this criticism being particularly prominent through The Newsroom and Studio 60 on the Sunset Strip, with this being a problem of Sorkin’s overall style, the best characters Sorkin writes being variations of himself. Now personally I feel he has done some excellent writing for some female characters, mainly CJ Cregg and Abby Bartlett in The West Wing, but I do understand where the criticism is coming from and, evidently, so does Sorkin. In this film, Sorkin focuses on the treatment of Molly and how undervalued and attacked Molly is for being a woman and how Molly fights against the treatment she receives because she’s a woman, particularly earlier on in the film. For the most part this side of the film works, but there is a point at the end of the film where this side of the film just hits a brick wall due to a pretty misjudged scene between Molly and her dad. In terms of the story a scene like this was needed, but the way it was executed was dodgy. The other main focus of Sorkin for the film is in the depiction of poker. Now the poker world is a prime target for Sorkinian dialogue, the fast pace needed being a fertile ground for this dialogue and hearing this type of dialogue for the poker games keeps the pace and entertainment value strong throughout the film.

The performances meanwhile help to sell the film with how the actors work with Sorkin’s dialogue. Jessica Chastain continues to cement herself as one of my favourite actresses working today with her work here. The power vibe that Chastain gives throughout the film makes sure you know how she was able to successfully execute the games and she does a great job at showing the anger Molly feels throughout the film at how she is treated. The skill and speed with which she delivers Sorkin’s dialogue is exceptional, doing a great job at making this dialogue, which has always had a fanciful air about it, feel believable, and there is a care that Chastain brings to show the personal investment that Molly has in every aspect of her games. Idris Elba meanwhile is a great foil for Chastain in the scenes they share together, the quick fired arguments that Chastain and Elba deliver showing the power of Sorkin’s dialogue in the hands of seasoned professionals and Elba sells the character arc of him slowly gaining more respect for Molly as he understands how she’s been treated effectively. Michael Cera as Player X, an amalgamation of the actors in Molly’s games (the most likely direct inspiration being Tobey Maguire) is a brilliantly slimy figure and Chris O’Dowd is a brilliantly pathetic figure, although it is incredibly weird to hear O’Dowd speak with an American accent. Kevin Costner does solid work as Molly’s dad showing himself as a pretty horrible dad through how much he pushed Molly, even to the point of severe injury, although he does care for Molly deep down, and we get solid comedic performances from Brian D’Arcy James and Jeremy Strong.

Now on a technical level, Sorkin’s direction is fairly by the books and does the job for the film, but the real shining point of the film is the editing. For a film like this, with dialogue this fast and focusing on the world of poker, if the editing does not keep the pace strong, then the entire film will fall apart. Thankfully, the team of Alan Baumgarten, Elliot Graham and Josh Schaffer are able to provide a strong pace throughout the film, making sure we know exactly what is going on during the poker games and keeping the tension high during these scenes, along with making sure there isn’t a boring moment throughout the over 2 hour run time of the film, especially when combined with Charlotte Bruus Christensen’s cinematography.

Overall, whilst there are problems with the film, particularly in the final act, I found Molly’s Game to be an incredibly entertaining film that works as both a fast paced look at the poker world and a strong character study of Molly Bloom. There are the usual problems that can be seen in any Aaron Sorkin script but the skill of the cast helps to alleviate this problem, with Jessica Chastain giving a powerhouse performance as Molly Bloom.