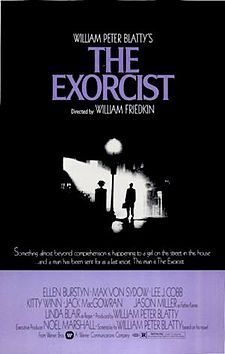 So for my October Blind Spot, I felt it would be best to cover a horror film, and what better one to cover than the one with the reputation as being the greatest horror film ever made, The Exorcist. Since The Exorcist was released in 1973 it has received heavy acclaim, being one of the rare horror films to be nominated for Best Picture at the Oscars and it’s the favourite film of my favourite film critic, Mark Kermode, so it was long overdue for me to watch the film and I have to say, it is a great film, but I do think it has been overhyped over the years.

The film focuses on actress Chris MacNeil, who is living in Georgetown in Washington DC during the filming of a new film. Whilst there, her daughter Reagan finds herself suffering from physiological and psychological issues and when studies find no concrete evidence for Reagan’s health, it is suggested that an exorcism can help Reagan. During this, we see the story of Father Damian Karras, who is suffering from a crisis in faith, expounded by the recent death of his mum, with Karras having his overall faith being tested through him being called in for Reagan’s exorcism, along with experienced exorcist Lankester Merrin. Now what works about the plot is the more psychological aspects, mainly related to Karras. The film does great work in showing Karras’ torment, the guilt he feels over the death of his mum and his overall guilt about not being able to help people and when the demon repeats phrases from earlier in the film to taunt Karras it creates some great disturbing moments hinting at the power the demon has. It’s also made clear how powerful the demon is through the way in which it possesses Reagan, the physical power Reagan is given and the clear pain Reagan is in giving real stakes to the exorcism as you want to see Reagan return to normal. However, as much as the psychological aspects of the film work, there are areas that I wish the film expanded upon, mainly the characters of Father Merrin and Lt Kinderman, the relationship between Karras and Father Dyer and the relationship between Chris and her director Burke Dennings. There are areas where these elements are explored but not to the full potential they could have been in order to fill out the world. However, I don’t apply this criticism to the demon, I feel that the less we know about the demon, the scarier it is due to the element of the unknown, and by withholding information about the demon and the motivations behind Reagan’s possession, it allows the audience to come up with their own ideas, which in turn creates a creepier atmosphere for the film.

On a performance level the film shines. Jason Miller as Karras does a great job at showing the crisis in faith Karras is going through and the guilt he feels over the death of his mum. These two elements combine with each other to create a compelling flawed character and makes the exorcism more powerful as we see how the demon is able to get into Karras’ head, twisting him so the exorcism would be more likely to fail. Linda Blair as Reagan meanwhile has to be commended for the physical strain she’s put through in the film, having to play two completely separate characters and having to convey the possession is putting her through and she does this brilliantly, aided by the work of Mercedes McCambridge in giving the demon a powerful voice. Ellen Burstyn meanwhile gives weight to Chris, showing the emotional distress that the demon is putting her through whilst Max von Sydow gives Merrin a powerful presence in his scenes in the film, letting you know why he was called to perform the exorcism just from body language and his air of intelligence.

On a technical level, this is a very impressive film, showing just how strong a director William Friedkin was at his prime. The direction and cinematography creates a powerful foreboding atmosphere for the film, the way Merrin is framed when he arrives in Georgetown and the way Reagan’s room is framed being of particular merit. Granted, this is partly due to the horrific conditions on set, mainly with Reagan’s room due to the it being a freezer to allow the actors breath to be seen (which was particularly hard for Blair due to the costume she was wearing), but it did produce effective results. This is also true for how Reagan’s strength when possessed is depicted, with great wire work and stunt work done to convey this strength and the movements of Reagan, but it wasn’t worth the injuries to the actors, mainly a spinal injury for Ellen Burstyn. Further praise also has to be given to the excellent make-up work, both for the possessed Reagan and the ageing up of Max von Sydow, with his appearance now being virtually identical to his appearance in this film, showing the brilliance of these effects, along with the use of music in the film, the standout being the creepy way in which Tubular Bells is used.

Overall, it is easy to understand why The Exorcist has the reputation it does as one of the premier horror movies with the psychological elements of the film making the case for the film effectively, along with the brilliant behind the scenes details of the film. The only problem I have with the film is that I wish some of the characters were expanded upon in greater detail to add to the world of the film and to make the stakes and emotional reactions in the film more real, but this doesn’t detract from the overall effectiveness of The Exorcist.

One thought on “2017 Blind Spot: The Exorcist Review”